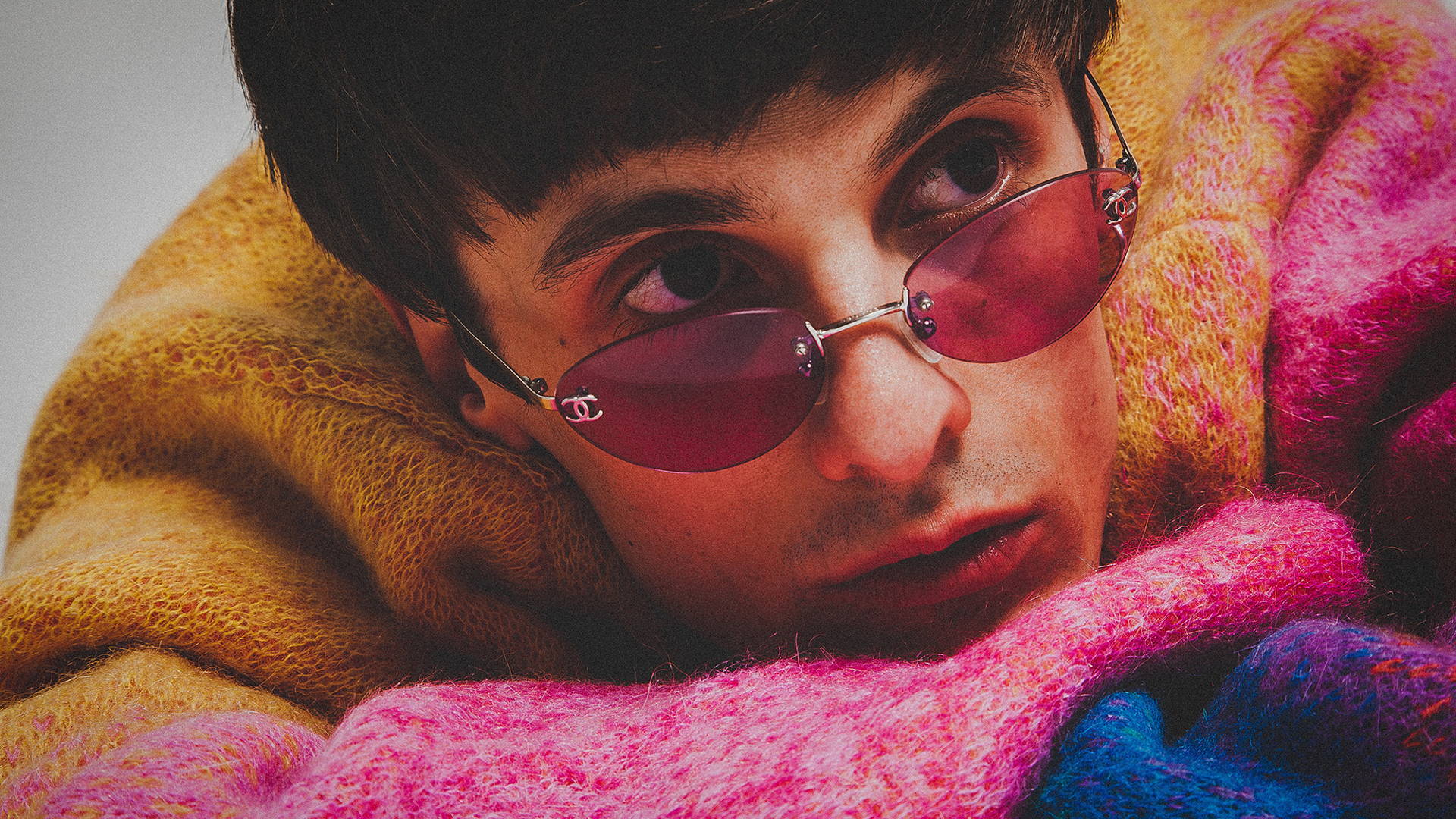 A very warm welcome to ERL here at Philip Browne, which is now available online and in-store.

Venice Beach native and artist, Eli Russell Linnetz created his first collection in 2018 after encouragement and support from COMME des GARÇONS’ Adrian Joffe. In a few years the brand has become a captivating force, thanks to Eli’s energy, vision and free spirited aesthetic.

His CV boasts a draw dropping list of collaborators such as Kanye West, Kid Kudi and Lady Gaga. His work fluidly expands across photography, filmmaking and set design, shooting all of his campaigns himself, beautifully capturing the essence and feel of the brands creative direction. Eli's recent guest capsule collection with Dior was presented in Venice Beach last week captivating the industry and propelling ERL and Eli into new territory as a creative force. The opportunity came from Kim Jones after meeting through mutual friends, in which Eli had full access to Dior's archive for the collection. 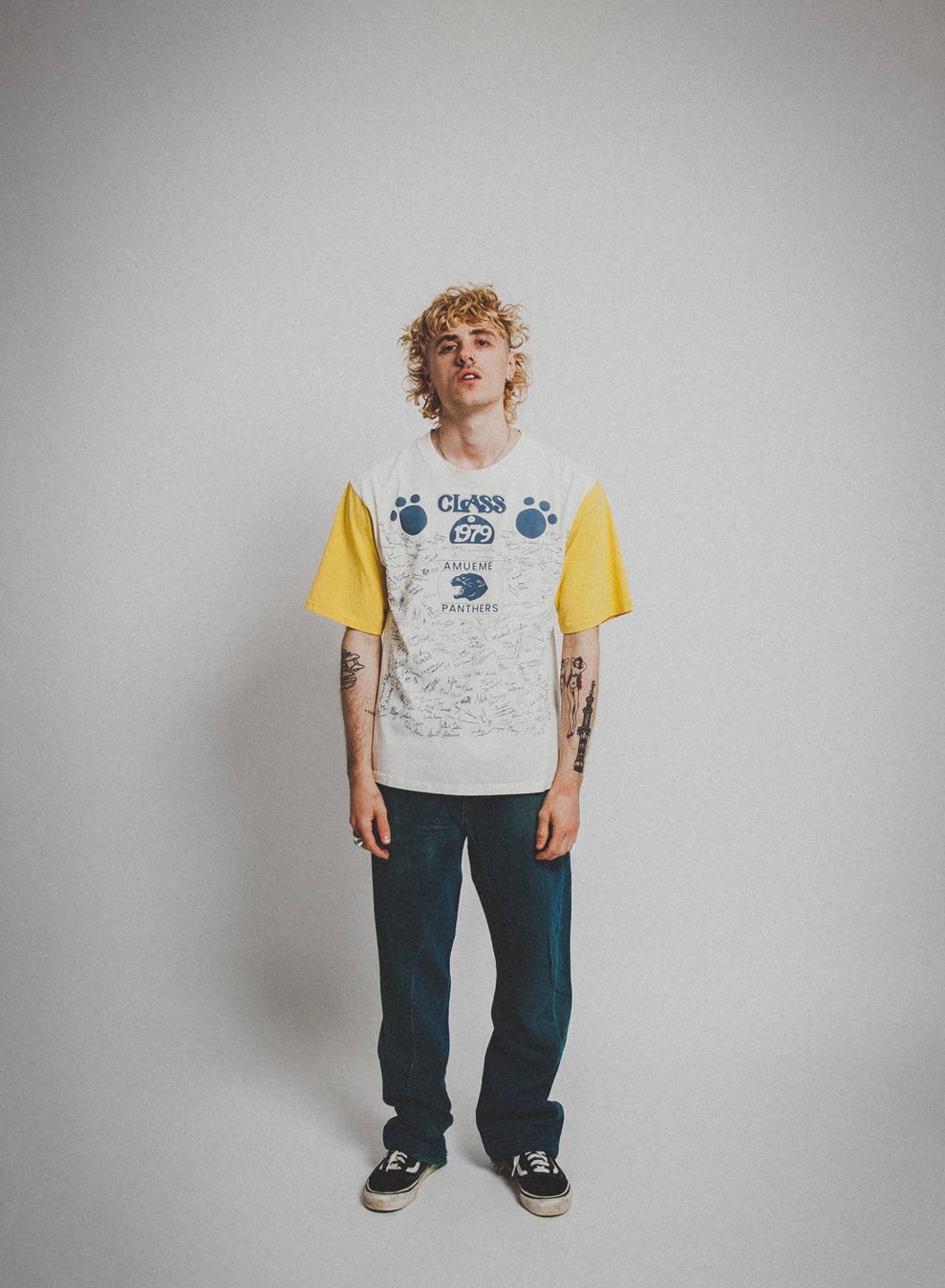 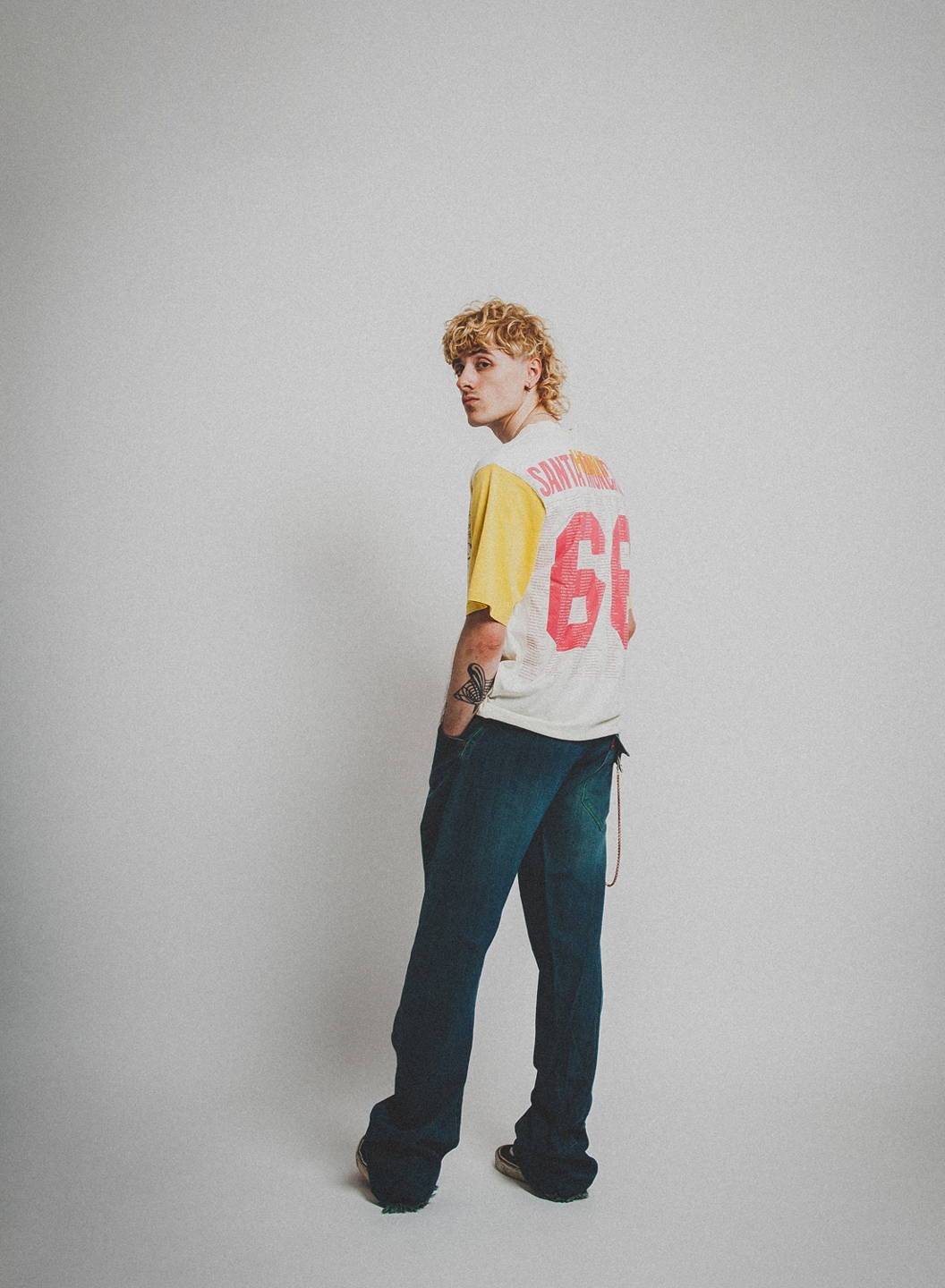 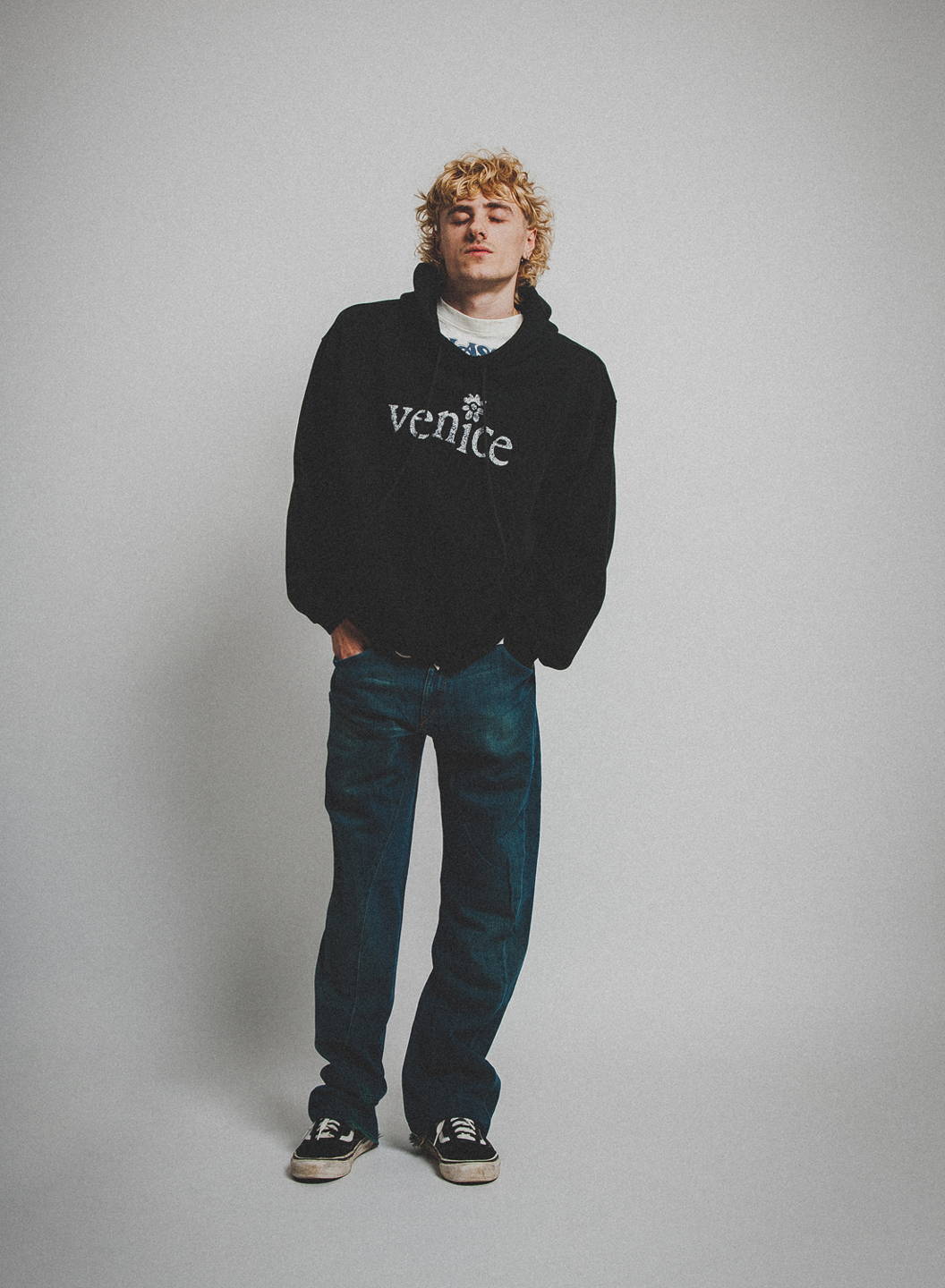 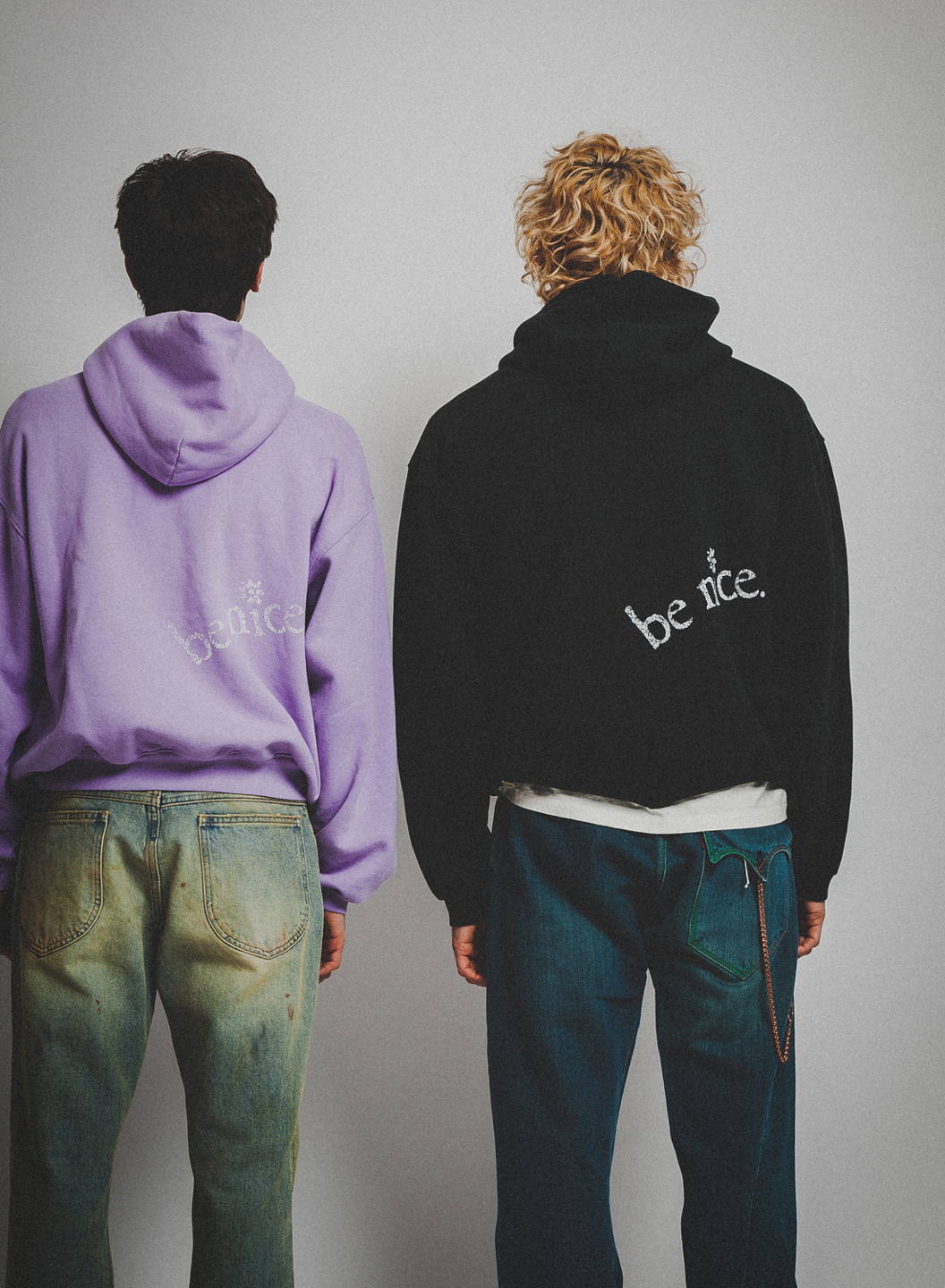 “Trying to see the beauty in everything ! To super pop, to Brian Eno making music in an airport” 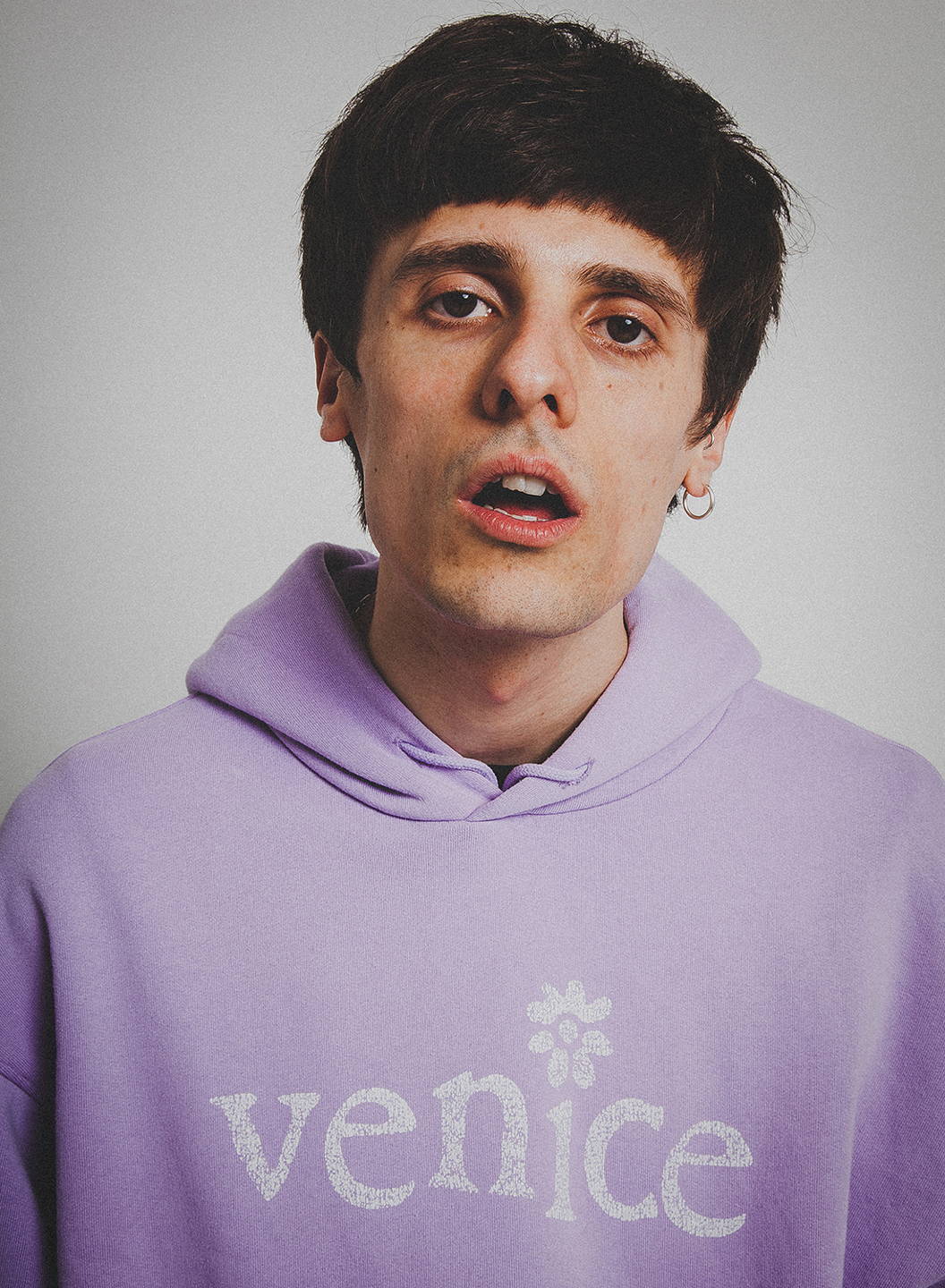 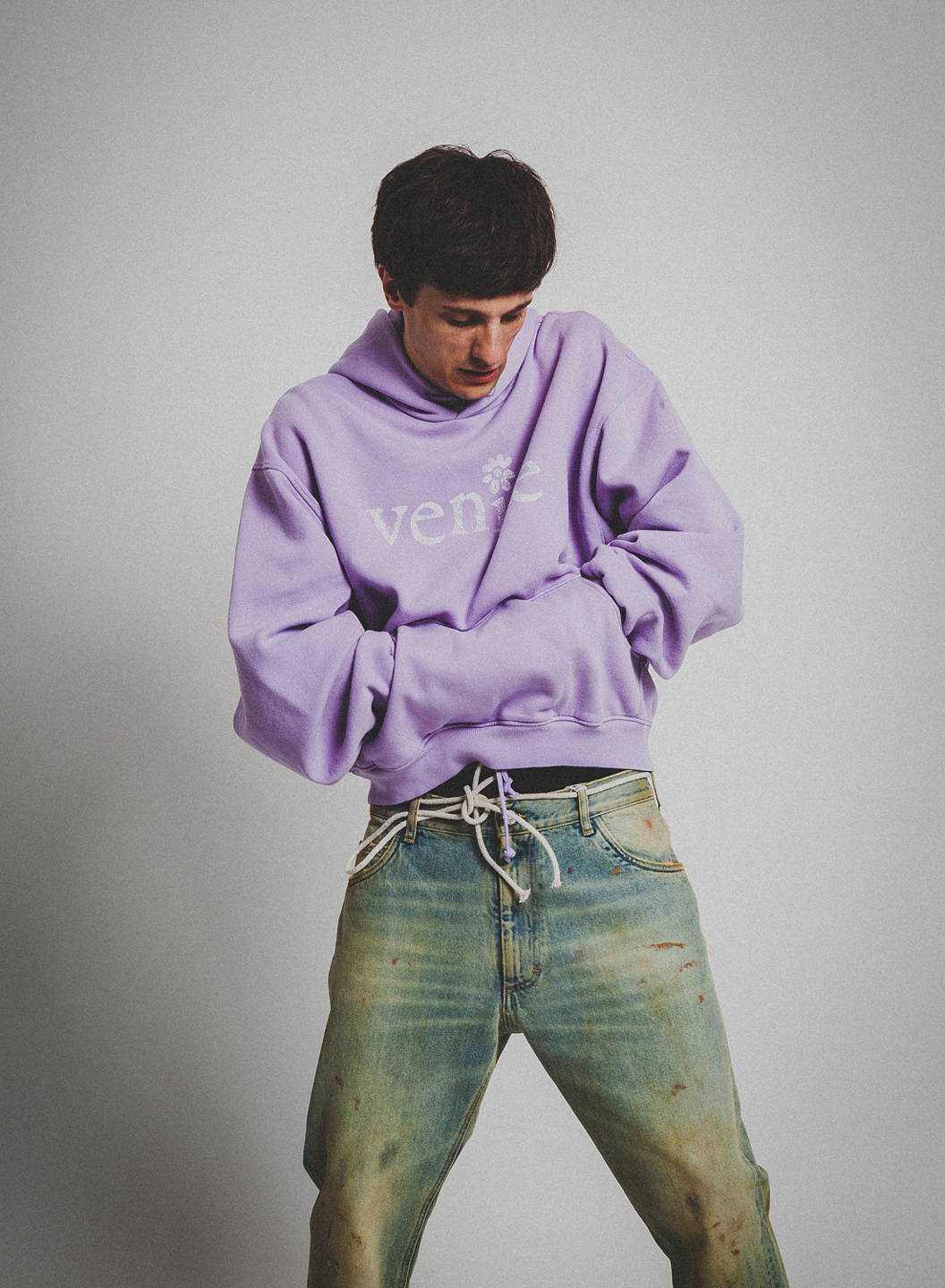 In all honesty, we didn’t know of (regrettably) PleasureInc prior to our shoot with the lads. Our photographer was out and about picking up a meal deal when he spotted Louis hanging around the infamous Jive Kitchen in Norwich (where he and his brothers work and own) Kev liked the look of him for a potential shoot and eagerly approached…which organically blossomed into a full on, collaborative energy pit of fun in our studio for the launch of ERL in-store and online.

The brothers embodied their aliases Kenny and Johnny, taking a keen pinch of direction from Eli’s shoots as a springboard for the feature, with a heavy dusting of their charming energy that seamlessly became the catalyst to the overall feel. Their energy is synonymous with ERL’s free spirited American aesthetic, which boasts their sought after, well loved hoodies, both swirl and “Venice Be Nice”, coming in a variety of colours.

The cropped yet oversized fit and elongated drawstrings are subtle gestures that become the quiet focal points of the incredibly cozy pieces, which include matching pink bottoms. The two piece signature heart puffer and trousers are the wild cards in this collection, providing the warmth you’d need once the sun goes down at Burning man. 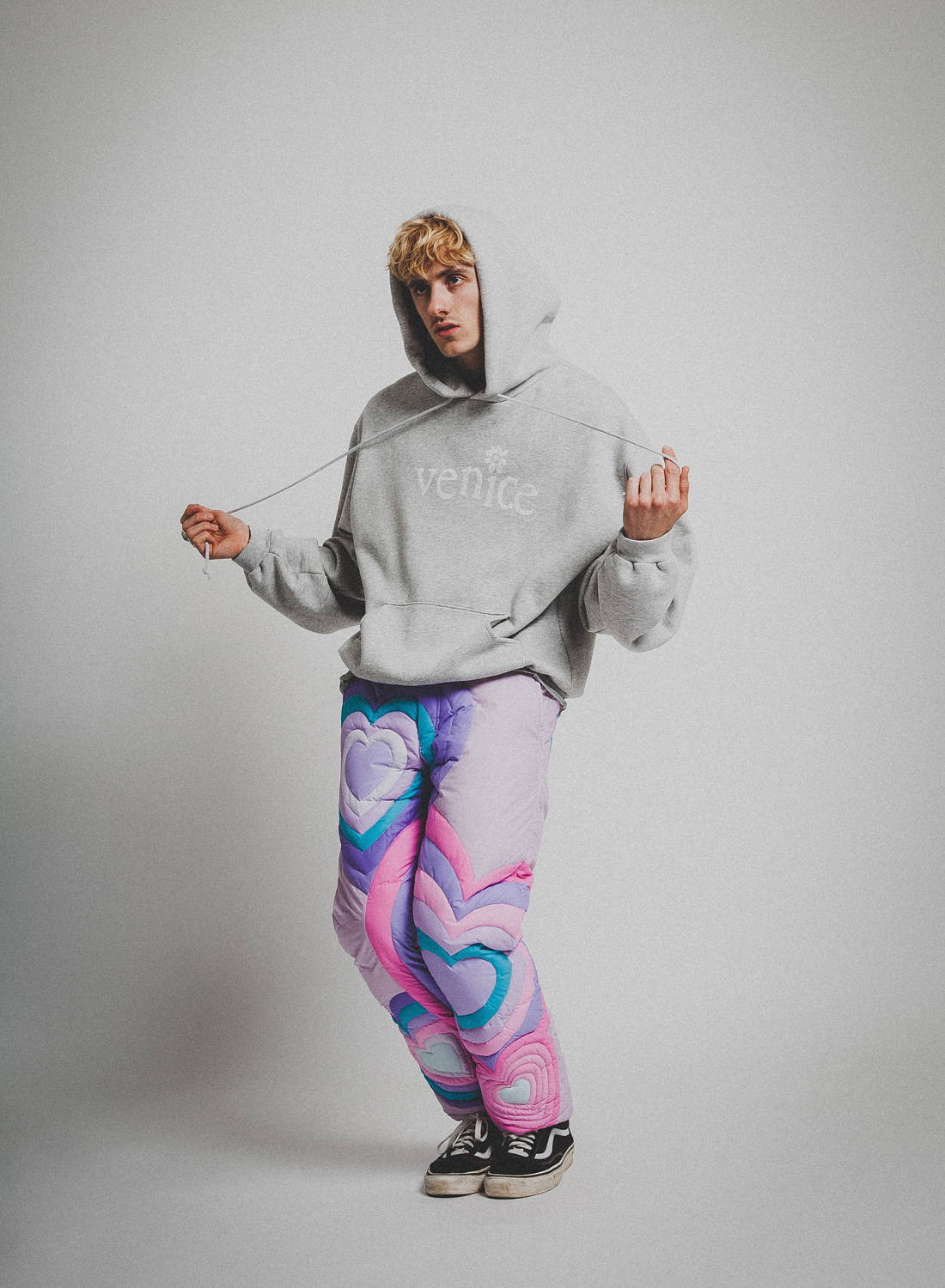 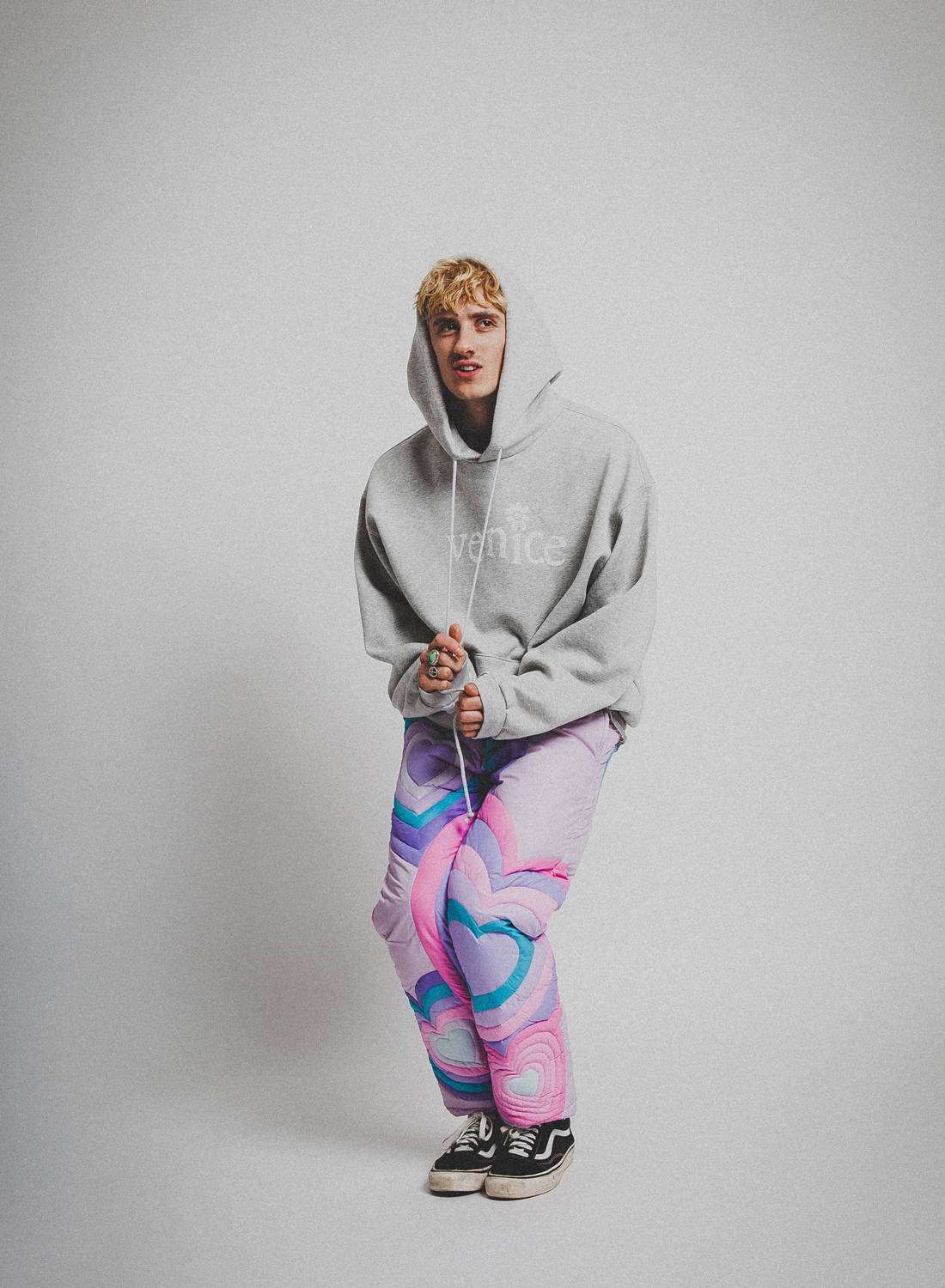 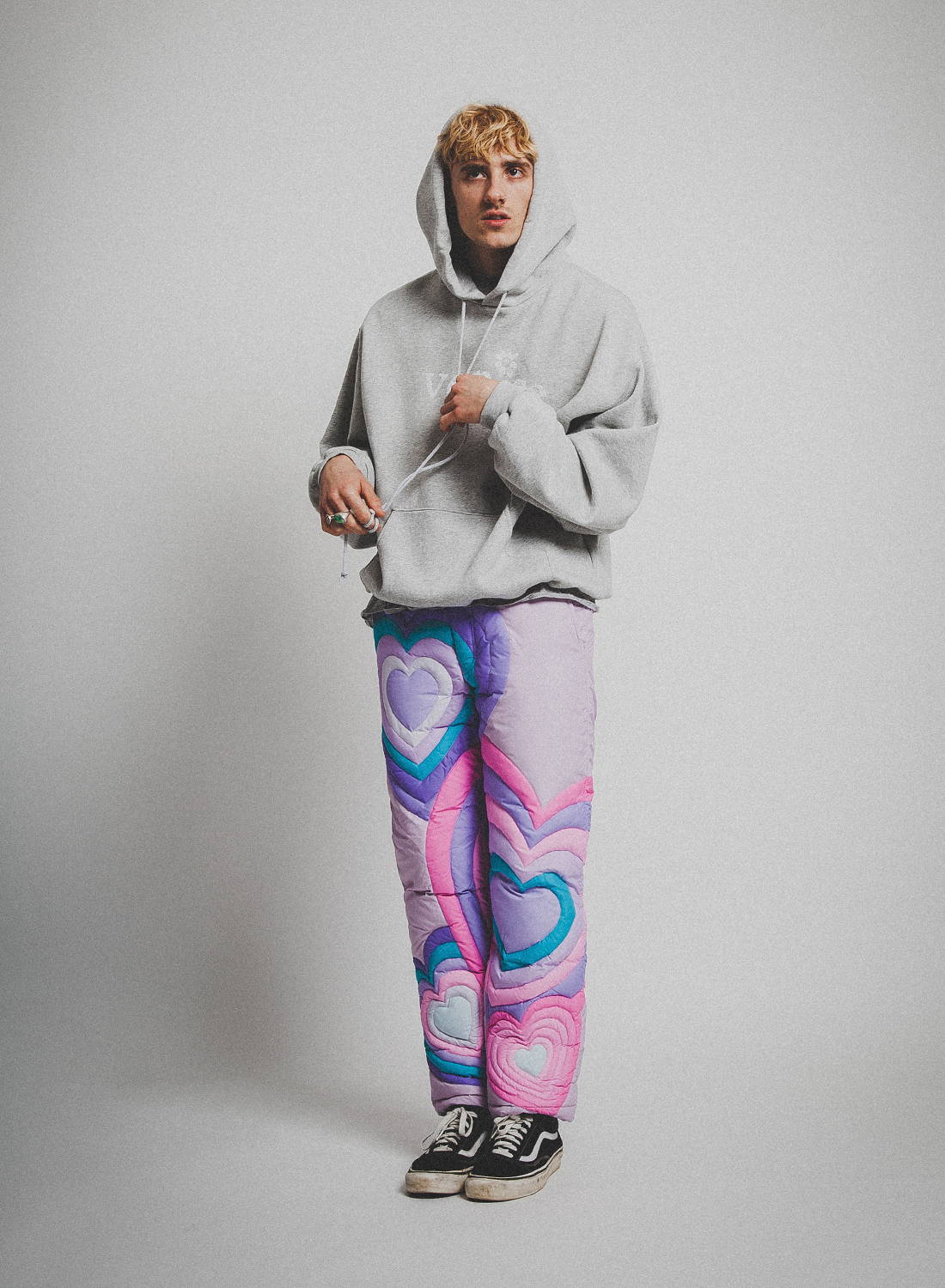 “Its a skill to find inspiration and use it” 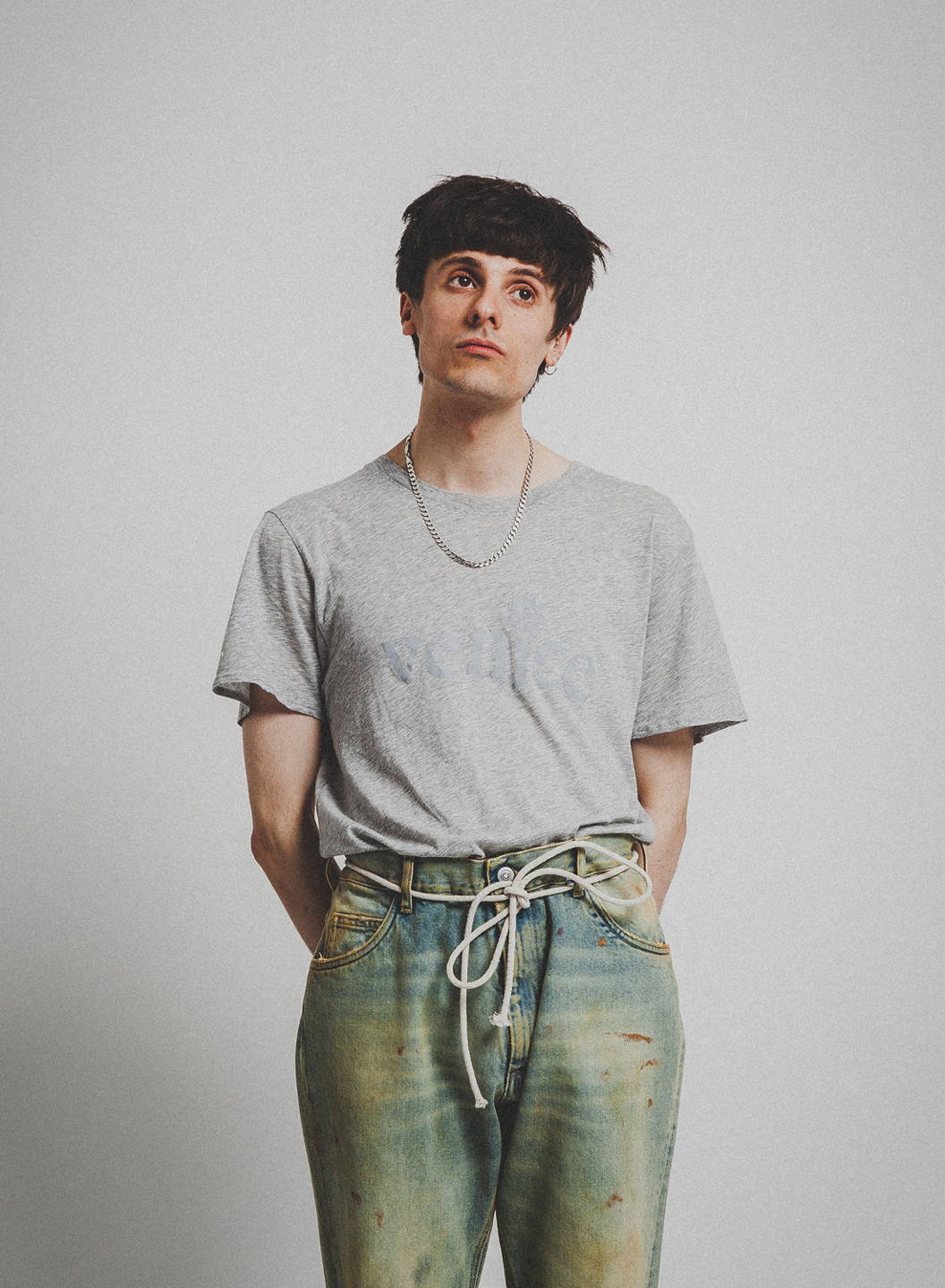 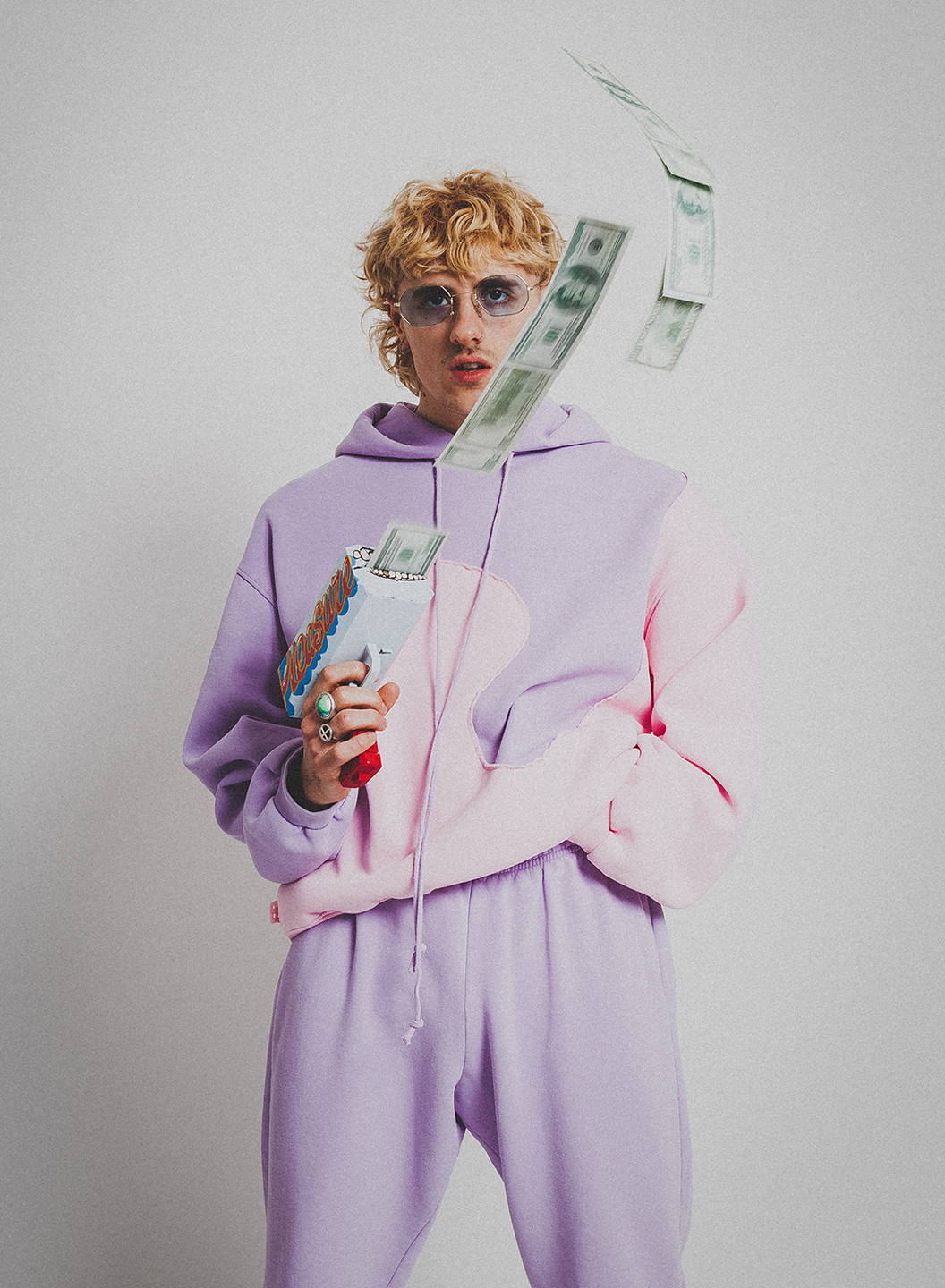 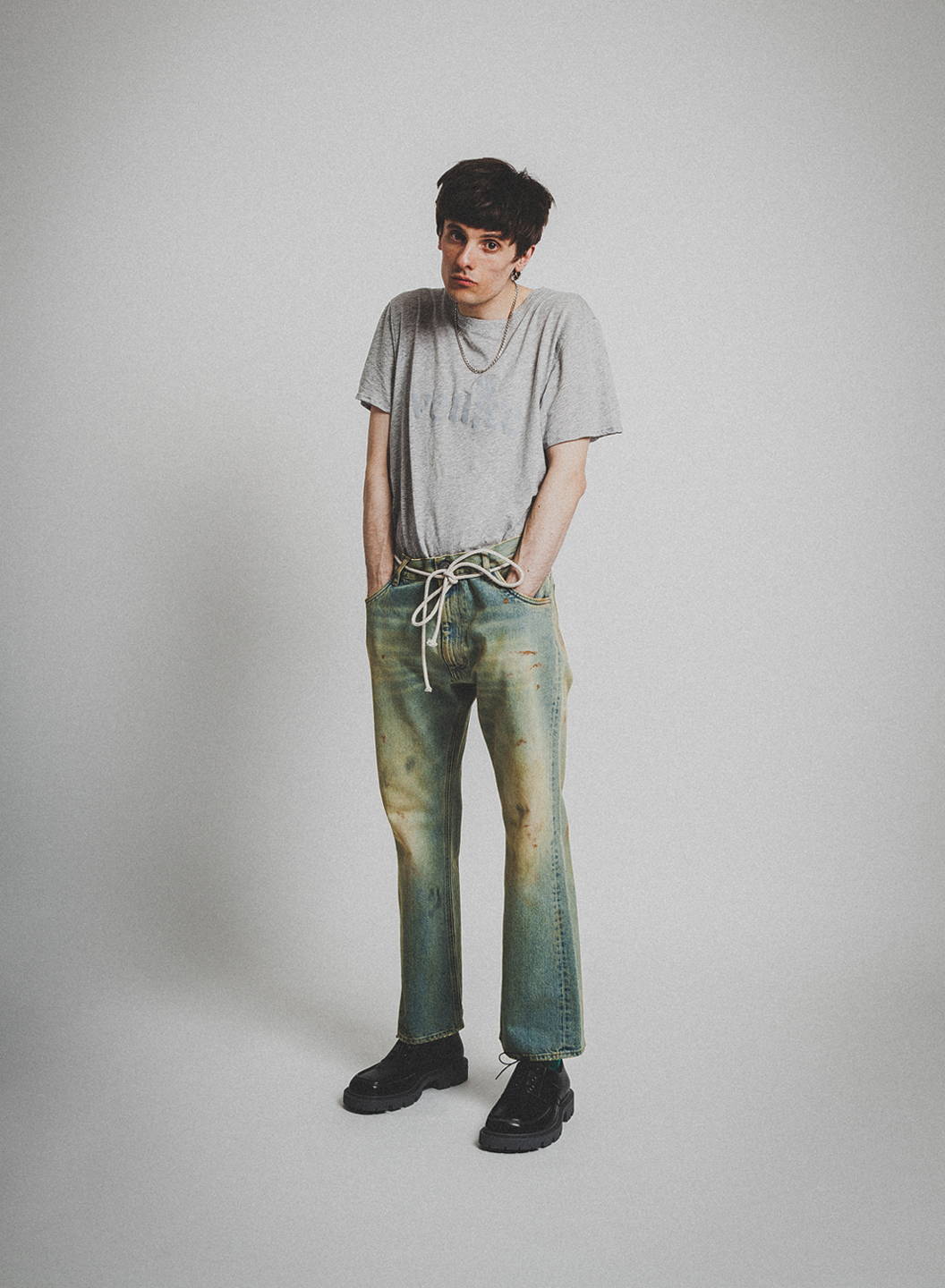 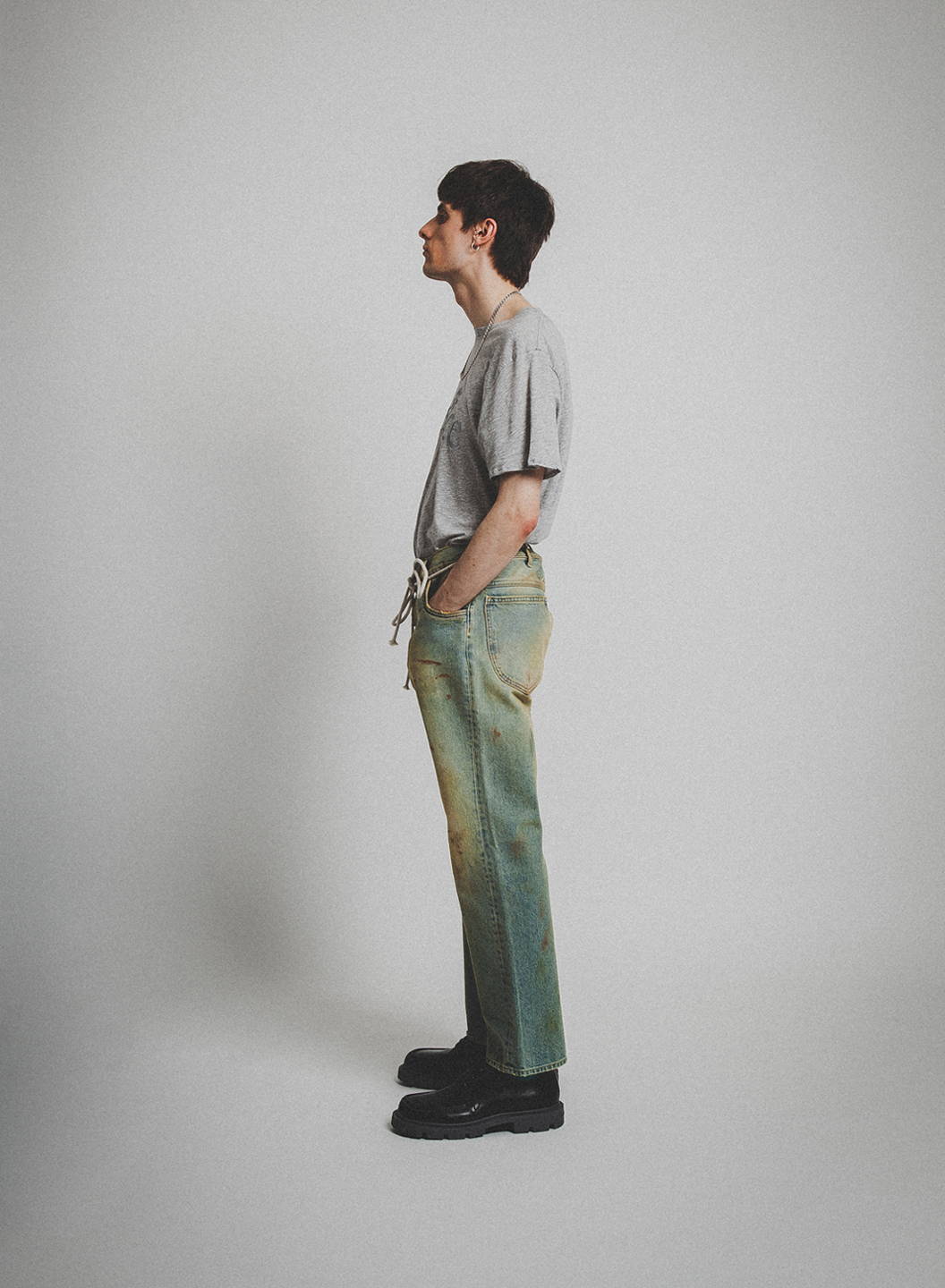 Post shoot, we caught up with the two brothers at our usual watering hole The Garnet, on the second floor looking out to the Norwich market. We sat down, each with a Guinness on a warm May day, and had a chat about the creation of PleasureInc, their creative processes with a side order of philosophical wisdom.

PleasureInc are made up of brothers Louis Baker and Jesse Baker, who also would respond to their aliases, Johnny Silver and Kenny Pleasures.

The project came into fruition at the start of 2021, when the two of them spent lockdown at their family home in Norfolk, being the first time they had spent every waking hour together since their halcyon days of adolescence. Whilst both of them were working at a warehouse packing baby wipes, and within the mundane haze of repetition, they began playfully dreaming up hypothetical scenarios of what their band might sound, look and feel like.

Creating aliases that were inspired by marathon film binges that began to assist their writing. Growing into a fluid dissection of genre spanning influences and visual output. Their music is playfully punchy that draws on a multitude of sounds, the result, something fresh and something good ! 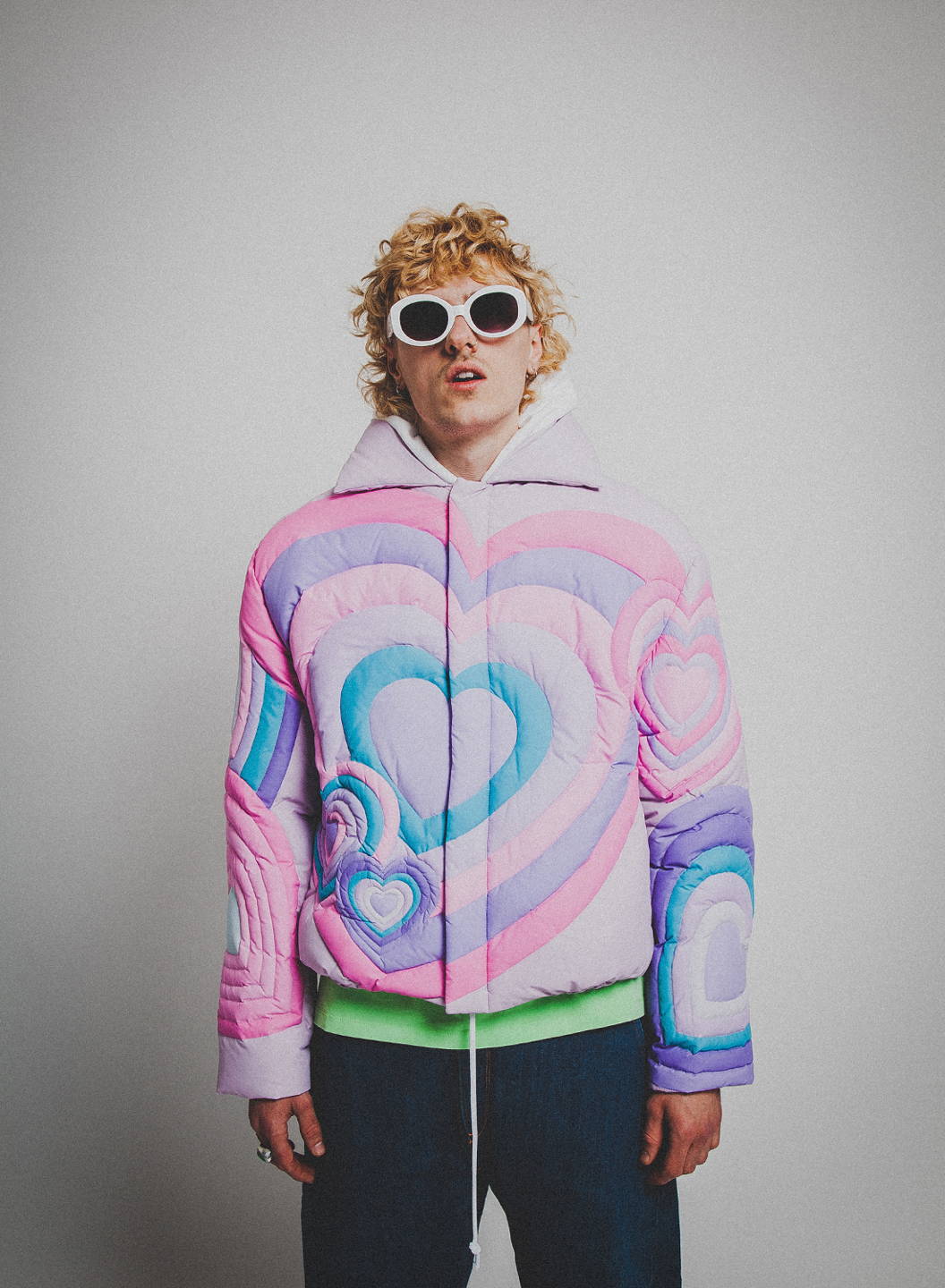 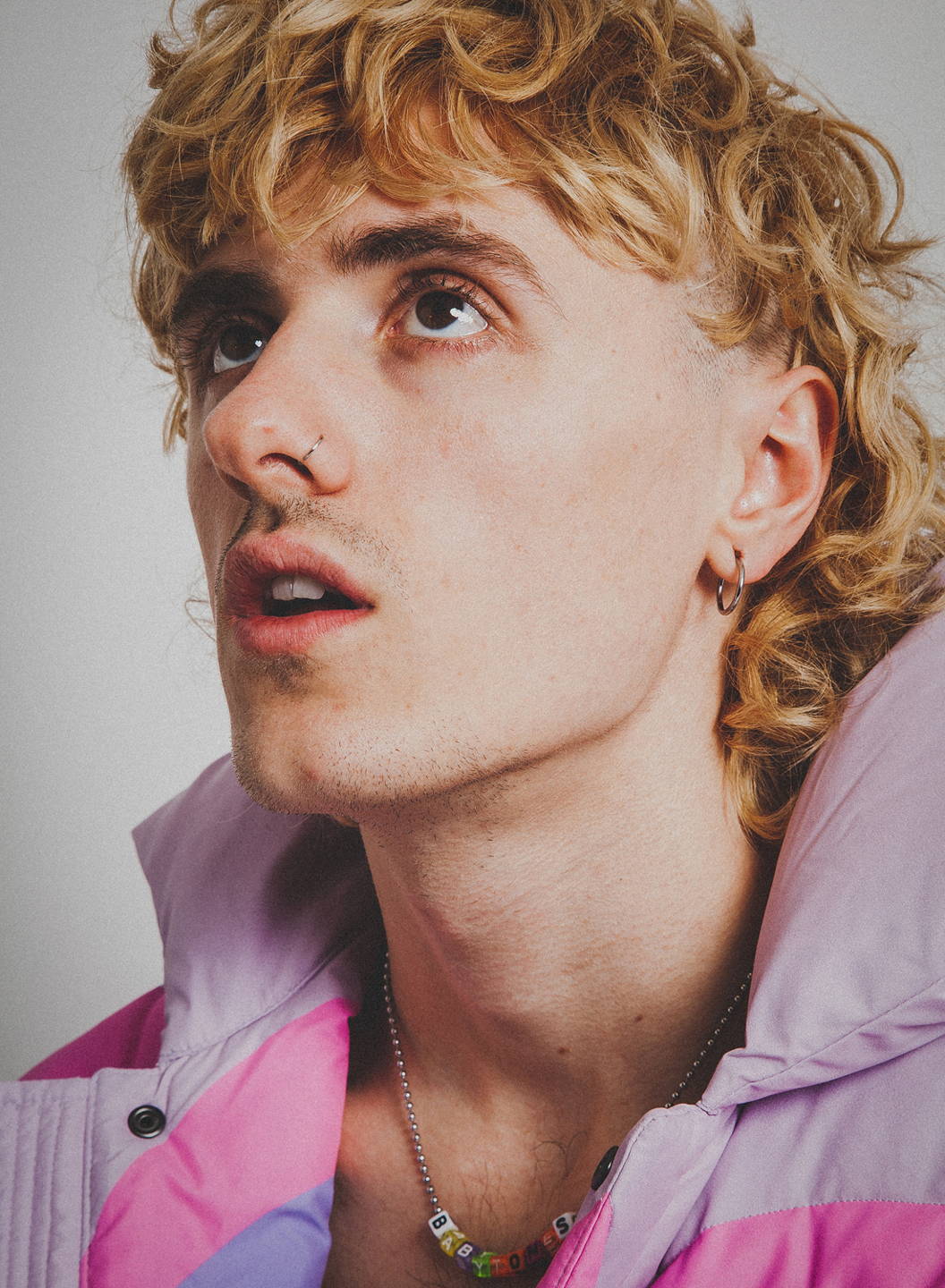 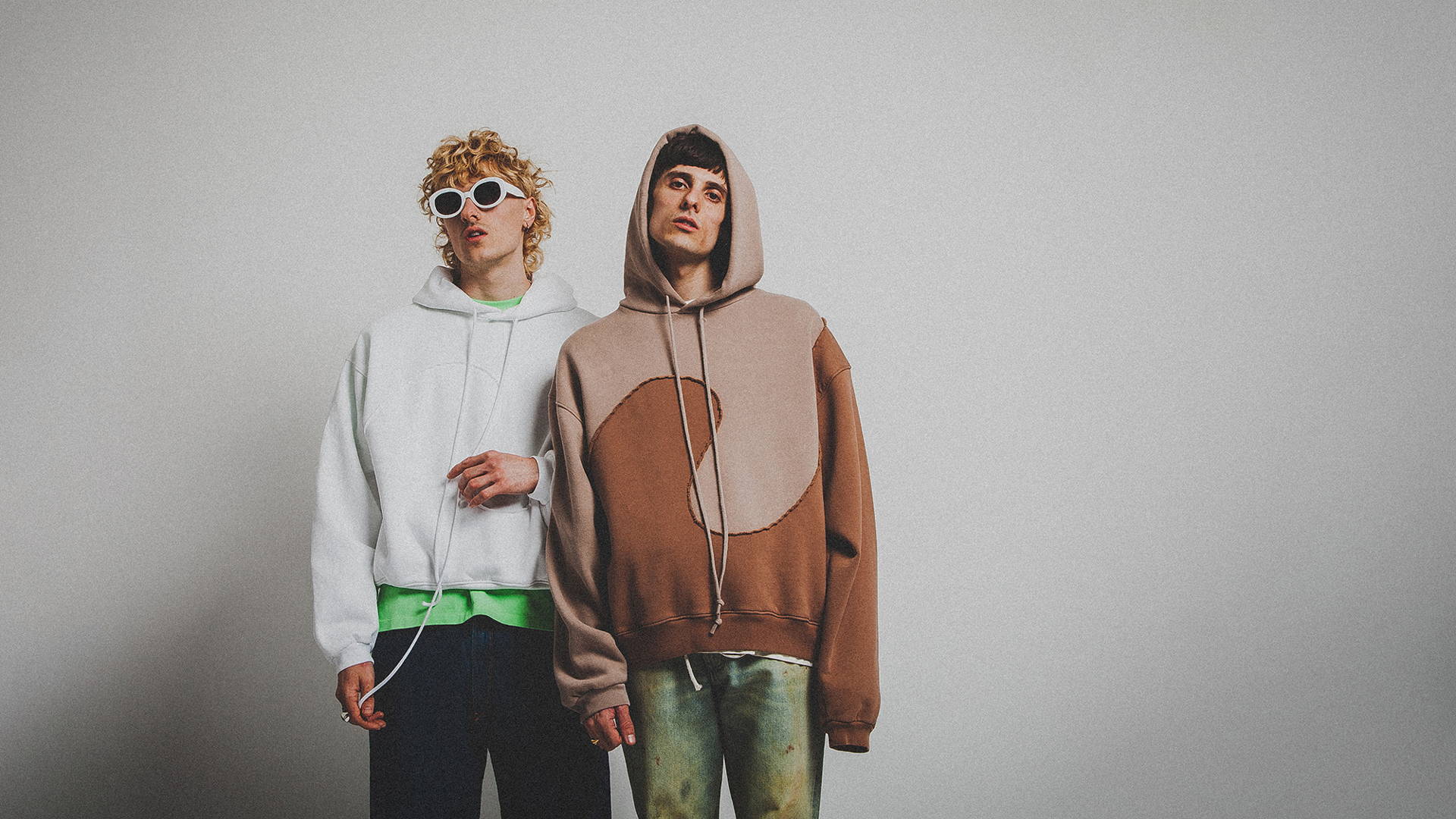 Jesse “After being in previous bands together and fizzling out due to the pandemic, we both moved back to Norfolk during lockdown and were with each other all day, every day”

Louis “We were working together and then going home together at the warehouse, we spent 8 hours a day talking about the PleasureInc vision and what it could be….”

Jesse “Louis wrote two of his best songs during those first few weeks, as soon as he wrote them we said “I think we need to re-think some things, because this is tight !!!”

Lockdown was almost too good, because the comedown from it has been hard. Me and Lou were at home every day, watching films, smoking zoots and spending every minute of every day together, and these ideas started to come to light. We were so lucky because we spent it together, it was like being with your best mate every day, but then also to be able to work and say hey “shall we get some stuff done, kind of thing ?”

Tell us about your creative process, or how you approach it ?

Jesse “There isn't a set way of how we do it, but just letting it flow and keeping the mind open, but what’s interesting is that we tried lots of different tactics over that whole period, things coming from various places but not one standing out from the rest”

Louis “ Yeah, the process isn’t really a formulated thing, it's actually having the ability to notice, realising when to hop onto something special, you can’t just pick and choose, you have to be ready, when your presented with a spark of something you like, it’s a skill to able to use it and turn it into something..”

Louis “There’s kind of a purity to writing music. Sometimes, I like to be alone, and going into writing a song with the intention of writing a GOOD song, is the worst thing you could possibly do, because your already measuring it before you've done it”

Lockdown allowed me to try new things. I just started writing words for the sake of it, without a preconceived idea behind them, then the meaning can reveal itself”

Your new single Croissant is a belter, can you tell us about it ?

Louis “Lou Reed said “Just because I wrote it, doesn't mean i know whats its about”

Jesse “I think we’re playing on the phoniness of modern life, feeding you shit without it having to make sense.

The creative process of Croissant is really about not overthinking it, making it in a pure sense and the second half of the song became a reflection of the first half, realising that this was us playing our characters unknowingly, until we started to add ‘meaning’

Our characters were formulated to express all those things that we don't feel about ourselves…Johnny Silver is one of the most confident guys out there, you know, it allowed us to put down ideas creatively without attachment, becoming a version of ourselves that we could project through the song” 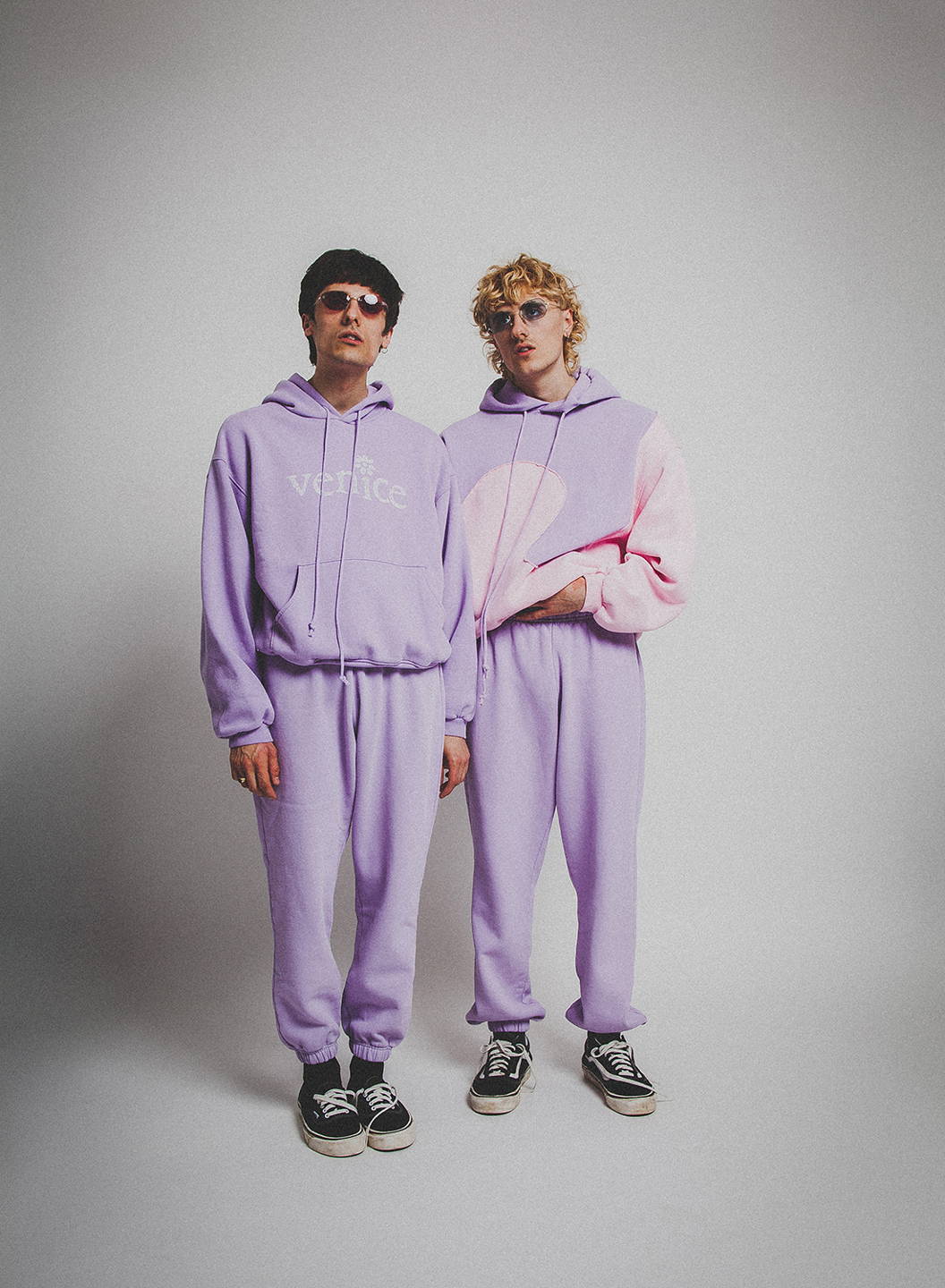 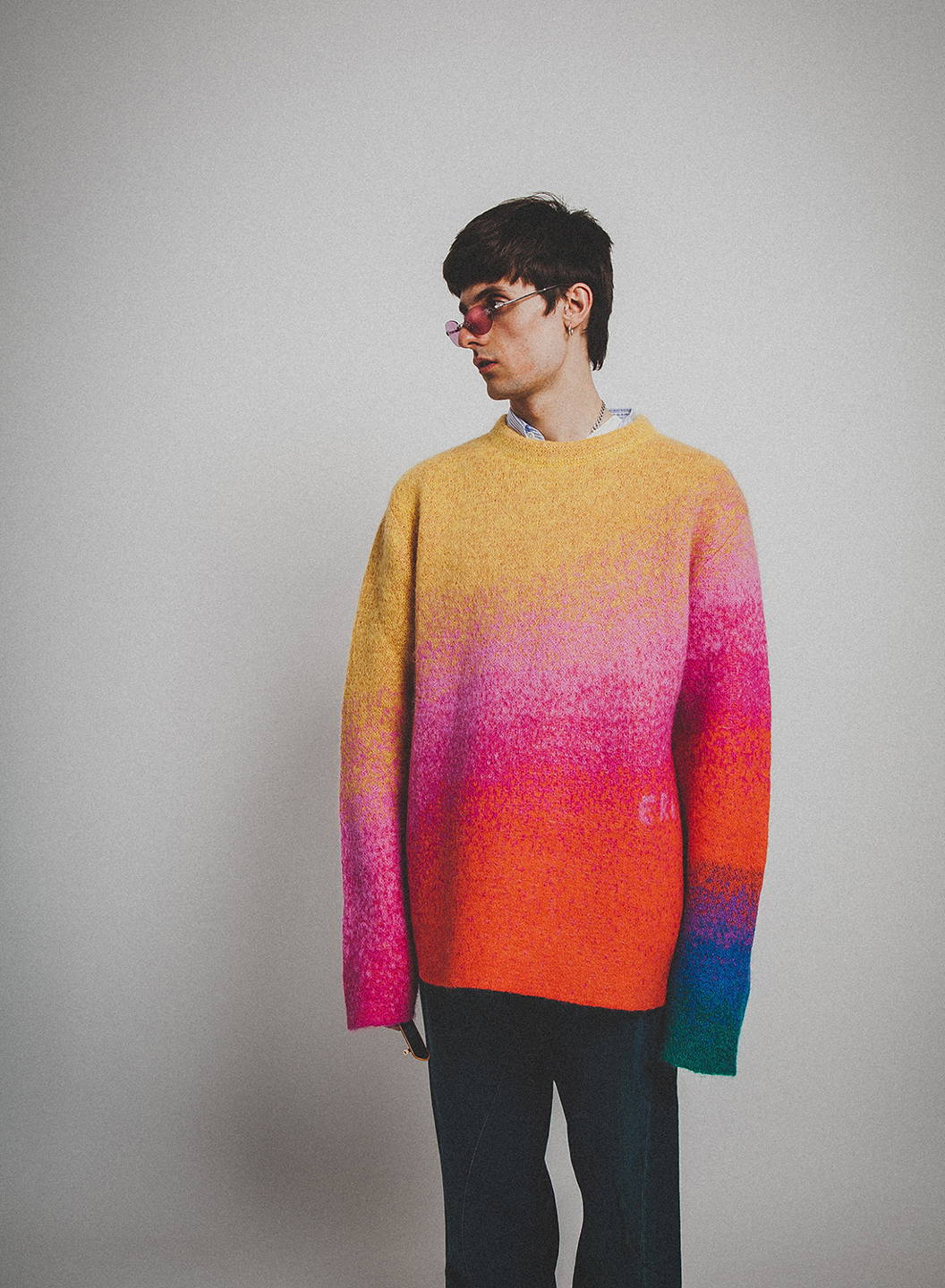 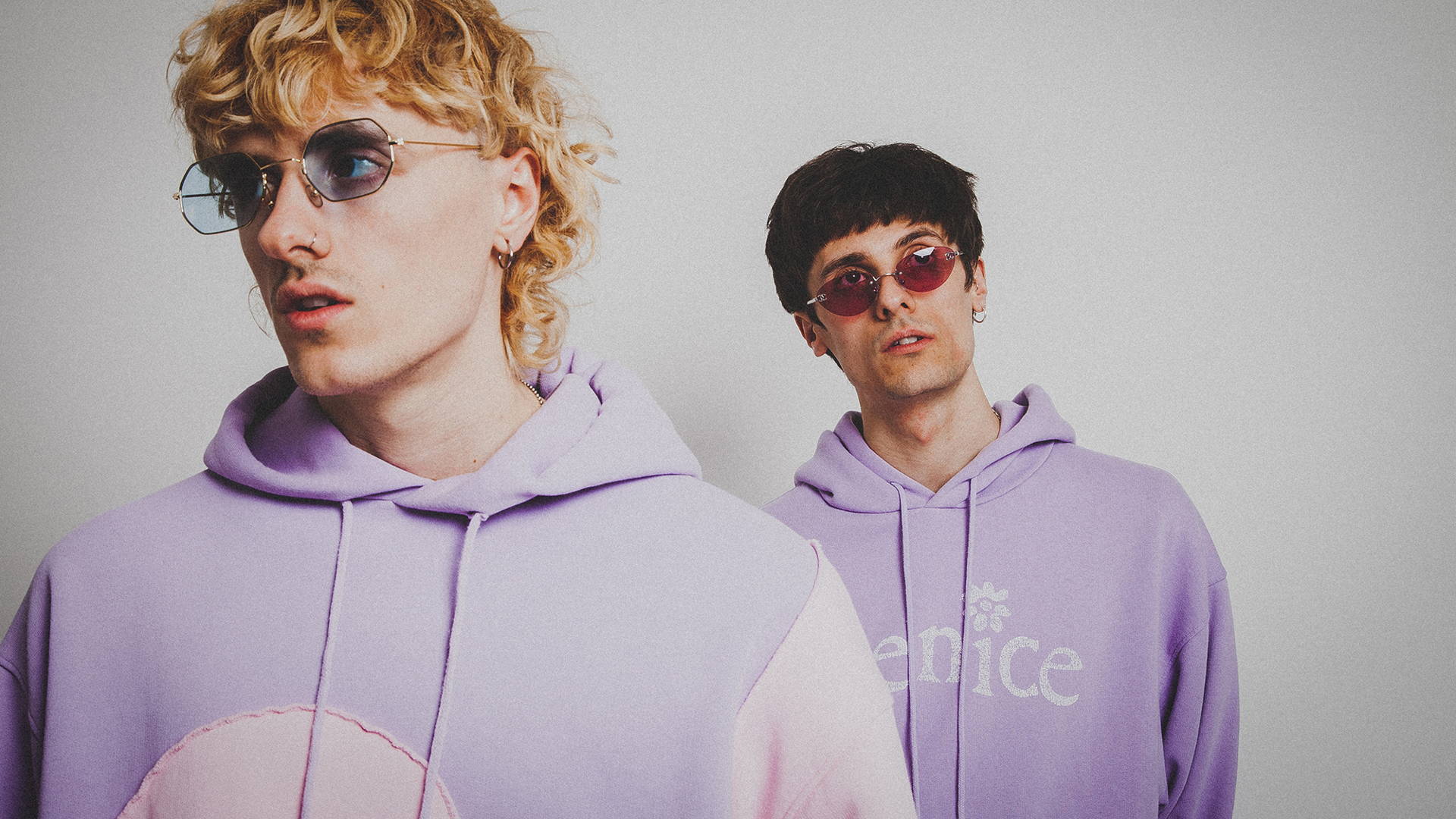 The successes of the shoot transpired into an idea for our window display that has definitely challenged our skill sets in vinyl installation. We’ve gone bigger than ever, testing our ladders capabilities and reach, printing the two of our favourite shots 3.5 meters high for all of Norwich to see, in a visual treat that plays with the architecture of the building.

Pop down and have a gander if you're around... 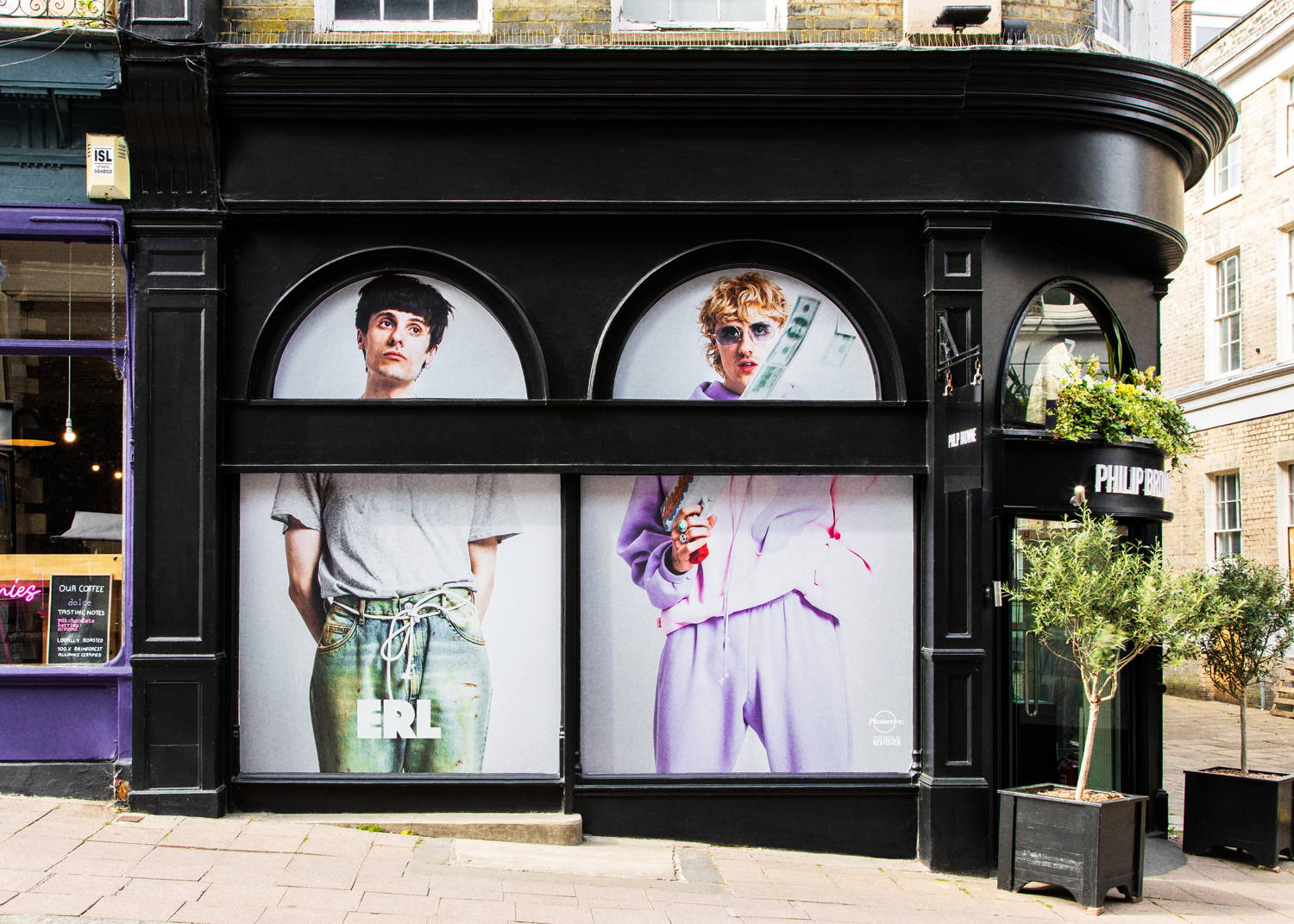 SHOP ERL
BACK TO HOME

Its A Small World After All

Celebrating The Arrival of Spring With Anmar Mirza